TOO little, too late? Well, try telling that to Kenny Dalglish this morning. 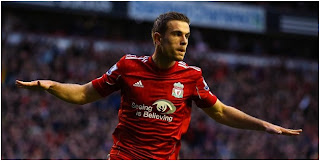 It may have been three days after the main event but at least it made for a happy farewell to the season at Anfield for Liverpool.And, who knows, when it comes to that end-of-term debrief with the American owners in the next week or so, it could still prove to be pivotal for Kop boss Dalglish.For with the heat rising on whether King Kenny should still be the man with his hand on the tiller next season, it has not done his chances any harm.However, the same cannot be said of John Terry’s claims to be England’s defensive linchpin after a first-half display as bad as any the Chelsea skipper has produced in heaven knows how long.

In fact, if Roy Hodgson used last night’s display as a benchmark, the new England chief would not be facing that most awkward of dilemmas over whether Terry and Rio Ferdinand could play together.

For if this was anything like the norm, the Blues stopper would be nowhere near the squad.
Captain, leader, legend he may be at Stamford Bridge. Captain, leader, liability he most definitely was here.
If only Luis Suarez and Co had produced something like this on Saturday, there would be no debates over Dalglish’s future and the FA Cup would be sitting alongside the Carling one in the Anfield trophy cabinet.

Nutmegged almost at will, left on his backside so often it is a wonder he did not end up with piles and looking petrified every time Andy Carroll went near him. That was Terry’s evening on Merseyside... and all that before we had reached the interval.
OK, it might only have scratched the surface of revenge for Saturday’s Wembley defeat but for Kop fans it will do very nicely for starters, thank you.
Chelsea’s plastic-flag wavers will obviously be quick to point out that only three of their cup heroes — the Champions League final banned trio of Terry, Branislav Ivanovic and Ramires — lined up last night.
Yet when the replacements include the likes of Michael Essien, Daniel Sturridge and a certain Fernando Torres, it is hardly the Dog and Duck side they are sending out. 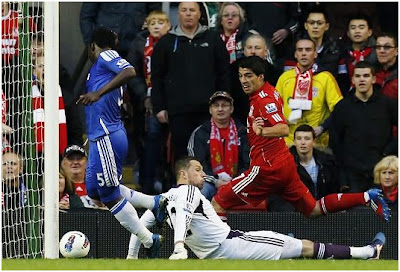 Last night they delivered the goods at last. Just a pity that it was all about saving face, rather than points meaning prizes.
And not even a cricket score was ever going to mask the fact that six home wins is their lowest return since Liverpool were relegated in 1954.
Mind you, the inquest into that can wait.
Ironically, Chelsea should actually have gone in front when Ivanovic thumped a header against the post from eight yards on 17 minutes.
Little more than 60 seconds later they were trailing.

There was no danger when Suarez collected the ball right on the touchline with blue shirts everywhere.
Yet he somehow danced past four challenges, before the cutest of pull-backs was turned into his own net by Essien. Six minutes later that lead was doubled, with Terry’s face left as red as his opponents’ shirts.
Maxi Rodriguez’s pass to Jordan Henderson was actually way off beam.
Yet when Terry lost his footing, the England midfielder hared off and slid a cool finish past Ross Turnbull.

Then Carroll’s presence so distracted the Chelsea defence that when he knocked Jonjo Shelvey’s corner back across goal, Daniel Agger was left free to head home in the 28th minute.
It should have been four when Ivanovic elbowed Carroll in the throat — somehow he escaped with only a booking — yet Stewart Downing drilled the spot-kick against the post.
That meant the Reds had missed a club-record SEVEN penalties in one season.
After Ramires pulled one back in the 50th minute there was a slight flicker of ‘Here we go again’.

But as Shelvey half-volleyed a shocking clearance from Turnbull back into the net from 35 yards after 61 minutes, Terry and Co’s misery was complete.
It also kept up Dalglish’s astonishing record of never having lost to Chelsea in a dozen games as manager.
The Kop boss will be a lot more confident this morning of being given the chance to make it a lucky 13. 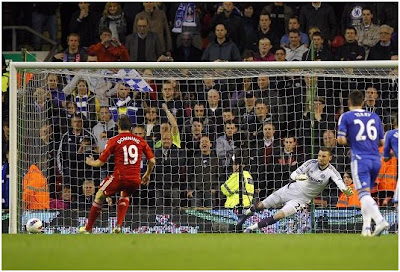 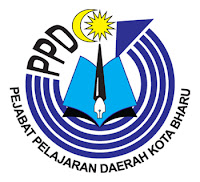 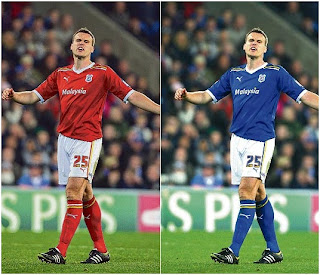 THE Far Eastern tycoon who owns soccer’s Cardiff City stunned fans yesterday by declaring the team have to DUMP their historic blue strip.

Malaysian magnate Vincent Tan wants the side — nicknamed the BLUEBIRDS — to switch to RED.He is convinced it is a more “lucky” colour after the Championship side came within an ace of promotion to the Premier League — only to lose in the play-offs to West Ham.Fans of the club, which has sported blue for more than a century, were outraged last night as it emerged the change will be rubber-stamped within a fortnight.At first, many thought it was a joke.A lucky DRAGON may also replace the bluebird on the club’s crest, which is likely to mean the team gets a new nickname.In return, Mr Tan’s Malaysian consortium will agree to wipe out Cardiff’s £20million debt and build a new training ground.A source said of Cardiff stars such as Ben Turner donning the new kit next season: “This is crazy and incredibly bizarre. The owner believes red is a more positive colour than blue.“A third of the fans are against it and another third still think it is a wind-up.“But a third would not care if Cardiff played in pink — providing they got promotion to the Premier League.”Mr Tan, 59 — who is worth £800million — is convinced the idea will lead to a change of fortunes for his side.Cardiff came within a whisker of winning the Carling Cup this season but lost on penalties to Liverpool in the final.The side also made the promotion play-offs. But over two legs against West Ham they failed to score — as their opponents netted a total of five.Cardiff’s owners say they will give boss Malky Mackay more money next season to take the club into the top flight.

John Terry on a knife edge for Euro 2012 place 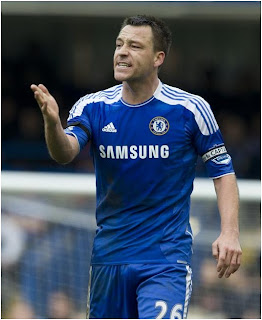 SunSport understands that new boss Roy Hodgson is worried about having both Chelsea skipper Terry and Manchester United defender Rio Ferdinand in his squad.
Terry lost the captaincy when his court case, in which he is accused of racially abusing Rio’s brother Anton, was set for July 9 — which is after the Euros end.Previous coach Fabio Capello vowed he would still take Terry to the finals.Now, with a change of manager, there is a possibility that JT could miss out if Hodgson decides the presence of both men will cause divisions in the camp.Hodgson has not yet spoken to either player about the situation. But Terry has said he has no problems about going to the Euros whoever is in the squad and insists he will never give up on England.Ferdinand wants to go too but has not voiced his feelings publicly.Even if the pair insist there will be no animosity, Hodgson is still concerned about the atmosphere that could be created among the squad.It would be a bitter blow to Terry if he is axed, especially as he is also suspended for Chelsea’s Champions League final against Bayern Munich.Hodgson names his squad next Wednesday and flies out for a training camp in Spain the following Monday before a friendly in Norway on May 26.